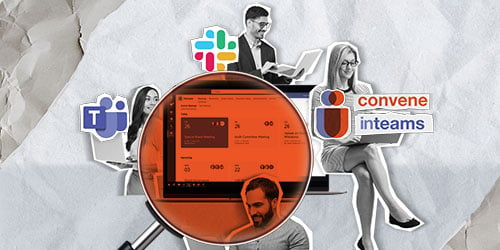 Microsoft Teams and Slack are designed to promote communication. Over the past 18 months, we have seen a rapid move to digital transformation. These virtual platforms are now a standard for collaboration in the 21st century.

There are two different types of meeting: formal and informal meetings. Formal meetings are a structured part of compliant decision-making. They are used by Boards to ensure that every business decision is fully checked and recorded in an appropriate manner.

On the other hand, informal meetings are designed to promote free-flowing conversation. They are part of the journey to arriving at conclusions by virtue of collective discussion.

Microsoft Teams and Slack are mostly used for informal meetings. They are purpose-built for people who want to engage with others in a collaborative context. As a result, you can view this type of software on the majority of devices: from mobile phones to tablets.

What Are The Similarities Between Teams and Slack?

Both Teams and Slack start with the idea of work as an organic process that is aided by a collaborative approach. For effective work to take place, access to different channels is essential. They offer multiple methods for file sharing including text, video, image or instant messaging.

Slack was developed as an internal communication tool for Tiny Speck and released to the public in 2013. Teams was launched 4 years later in 2017. Before this release, Slack wrote an open letter to Microsoft which was published in the New York Times. They gave 3 pieces of advice in developing the new software:

Five years later, it is hard to imagine a virtual collaboration marketplace without Teams. While love and thoughtfulness are difficult to quantify, there is no doubt that Teams is a success. The product has a lot of similarities to Slack in how it streamlines communication.

Both products allow teams to share information quickly and reduce reliance on emails. They have a relatively similar interface through which users can share public and private messages. There is also the option for real-time communication (in Slack’s case with audio channels and for Teams mainly with video conferencing).

What Are The Differences Between Teams and Slack?

Since their inception, both tools have evolved in different directions. The resources and name-brand recognition behind Teams have allowed them to capitalise on the marketplace and bring in a higher number of users than Slack. To date, Teams has over 250 million users while Slack has 12 million.

What accounts for this difference? For one, the video conferencing feature of Teams is a real advantage in remote meetings. There are many situations where it is useful to have a camera on or a shared screen.

Perhaps the most important factor is the accessibility of Teams. Both Teams and Slack have integrated software that can be accessed through the app. Slack’s third-party integrations include Google Drive and Trello. However, Microsoft Teams definitely has an advantage in this department.

Given the size of Microsoft’s portfolio, it is understandable that Teams has an almost comprehensive range of features. In particular, Microsoft Office 365 integration makes collaboration easier as users don’t have to switch between multiple apps.

What Do These Collaboration Tools Mean for Virtual Meetings?

According to research done by Professor Patrick Hall and the University of Malmo, the anticipated users of collaboration software are those who are expected to spend the most time in meetings. These groups include consultants, advisors, project managers, product managers and strategists.

Professor Hall argues that meetings today are more likely to be regarded as a time when employees can show off their work or complain about frustrations, instead of strategising. This is useful in itself but it is not always enough. Sometimes, meetings need to be well-organised.

Many highly effective meetings are held by decision-makers who expect well-organised meeting packs and clearly defined, actionable items. Informal meetings can produce numerous assets in multiple channels that need to be reviewed in future meetings. No matter how intuitive the software you use, holding infinite informal meetings is not an efficient way to conduct business.

Convene in Teams is designed to manage meetings for this type of decision-maker. Whether it is used as an individual management tool or a way to compile a pack for a Board meeting, the Convene in Teams add-on is designed to streamline your meetings. The software allows you to access additional features that will facilitate a comprehensive meeting package.

With an integrated solution like Convene in Teams, shifting to online meetings will not impact your professionalism. The simple, highly accessible software contains everything the decision-maker needs in one place. It is possible to make annotations and assign actions to team members, with any updates added to the next meeting.

For the meeting organiser, there is no cumbersome navigation through multiple team spaces and associated information. Meeting packs are put together using the simple drag and drop interface. To maintain the maximum level of effectiveness in meetings, Convene in Teams contains a productivity reporting tool to monitor results.

And, as our users like to say; ‘Don’t just meet, Convene.’

Read our customer success stories or contact us today to find out more.

What is Project Governance

How Collaborative Tools Can Work Alongside A Board Portal